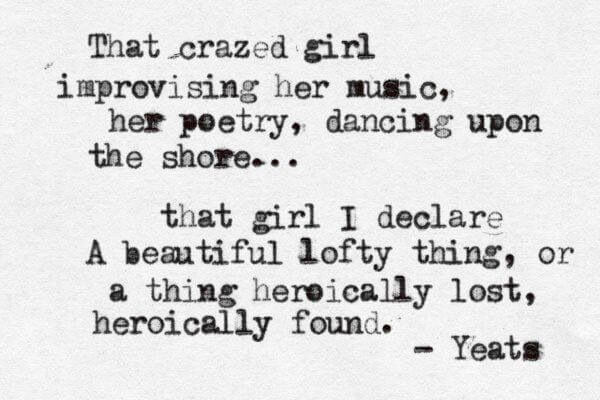 The poets and philosophers who wished to dance

My seeking for knowledge from the greats has made me a lover of poetry and philosophy. There is something magical about dancers, and some of these philosophers and poets, were able to express with words how we make the invisible visible.

It is very interesting that German philosopher Friedrich Nietzsche was depicted as an incorrigible cultural agitator by the aphorist and Pushcart-nominated poet Yahia Lababidi. Although Nietzsche was an atheist, his fondness for irony was always prevalent;  “I would believe only in a God that knows how to dance.” Nietzsche danced daily, saying it was his “only kind of piety,” his “divine service.”​

As a dancer, I often muse about my art. Dancing is a direct portal to the invisible, and the more I age, the less I hurry. It’s a knowing that needs equanimity, and learning the art of breathing, pausing, something that is very hard to explain to the young and entranced dancer. It knows how to let your inner Buddha lead the Warrior into battle. Somewhere along our path we seem to find the middle way more appealing, and the extremes less and less attractive. But the joys of that which is explosive needs to be expressed while young, a natural process it is indeed.  There is always an exception to the rule:

Part of the joy of dancing is conversation. Trouble is, some men can’t talk and dance at the same time.

Dance my friends, dance! Happiness is only a leap away!

Here is a quote from the Legendary Michael Jackson who gave me no choice but to dream of dance.

“Consciousness expresses itself through creation. This world we live in is the dance of the creator. Dancers come and go in the twinkling of an eye but the dance lives on. On many an occasion when I am dancing, I have felt touched by something sacred. In those moments, I felt my spirit soar and become one with everything that exists.

At this point the boy performed a dance, eliciting from Socrates the remark, “Did you notice that, handsome as the boy is, he appears even handsomer in the poses of the dance than when he is at rest?”

“Assuredly,” replied Socrates; “and I remarked something else, too,—that no part of his body was idle during the dance, but neck, legs, and hands were all active together. And that is the way a person must dance who intends to increase the suppleness of his body. And for myself,” he continued, addressing the Syracusan, “I should be delighted to learn the figures from you.”

“What use will you make of them?” the other asked.

It was said by a source unknown that Socrates learned to dance when he was seventy because he felt that an essential part of himself had been neglected.

Dancing in all its forms cannot be excluded from the curriculum of all noble education; dancing with the feet, with ideas, with words, and, need I add that one must also be able to dance with the pen?

And those who were seen dancing were thought to be insane by those who could not hear the music.

I do not know what the spirit of a philosopher could more wish to be than a good dancer. For the dance is his ideal, also his fine art, finally also the only kind of piety he knows, his ‘divine service.

We should consider every day lost on which we have not danced at least once. And we should call every truth false which was not accompanied by at least one laugh.

Dancing is the loftiest, the most moving, the most beautiful of the arts, because it is not mere translation or abstraction from life; it is life itself.

Everything in the universe has rhythm. Everything dances.

Music begins to atrophy when it departs too far from the dance.

Let us read, and let us dance; these two amusements will never do any harm to the world.

Dance, when you’re broken open. Dance, if you’ve torn the bandage off. Dance in the middle of the fighting. Dance in your blood. Dance when you’re perfectly free.

We ought to dance with rapture that we might be alive… and part of the living, incarnate cosmos.

And hand in hand, on the edge of the sand, they danced by the light of the moon.

― Edward Lear, The Owl and the Pussycat

Almost nobody dances sober, unless they happen to be insane.

Dancing is a vertical expression of a horizontal desire.

It’s the heart afraid of breaking that never learns to dance.

All the ills of mankind, all the tragic misfortunes that fill the history books, all the political blunders, all the failures of the great leaders have arisen merely from a lack of skill at dancing.

Be like a branch of a tree; flex your body to face ‘wind of sorrow’; flex little harder to dance in the ‘wind of happiness’.

For I have trained myself and am training myself always to be able to dance lightly in the service of thought.

Never give a sword to a man who can’t dance.

God match me with a good dancer.

― William Shakespeare, Much Ado About Nothing

To be fond of dancing was a certain step towards falling in love.

Maybe the poet embellishes too much, and the philosopher overthinks everything, but they both know with absolute certainty, that while they were musing, the dancer had already leaped and tapped into the source.