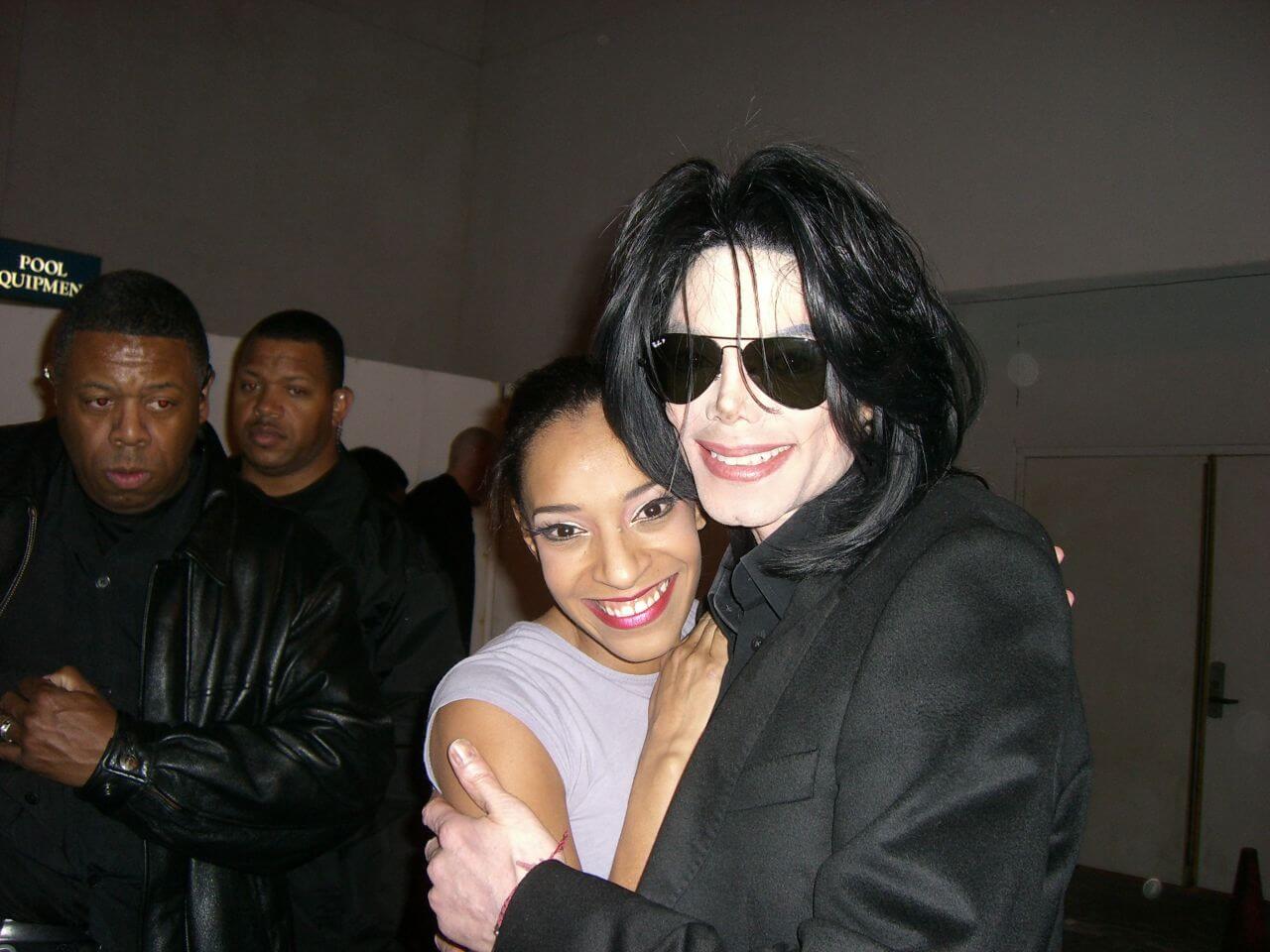 A true story about the power of dreams!

This is my personal testament to Michael Jackson…

I discovered my passion for dance around four years of age when most can’t even remember life before kindergarten. I remember opening this gigantesque wood box of a stereo with built-in speakers that could play AM/FM radio, eight tracks, and records. Back then, I loved freestyling in the entrance hall of our two bedroom apartment and in my family, soul music was the fuel to our bodies. There was never a day without music as The Jackson Five were always a part of the festivities along with others like James Brown and Stevie Wonder to name a few.

I remember catching glimpses of the Jacksons on the second most gigantic wood box of the apartment, our TV! I would always freeze and be in a complete trance as Michael would cast his spell on my spirit and I all wanted was to be near him, better yet, with him.

As a child when I’d fall asleep, I would dream about a young Michael and me playing games together in the streets. Mike was my childhood. I remember waking up with an eerie sense of connection like we had played together in a parallel world. I was maybe eleven or twelve at the time but knew he wasn’t a child anymore in real life. Sometimes I would almost make myself believe that it was Mike manifesting his younger self inside the spirited dream world where he would find other children to play with That day I must have been the chosen one, and we did PLAY (hiding behind cars, running down hills and playing catch)! It was pure joy!

Like many other kids and grown-ups, Motown 25 WAS the epitome of THE most unforgettable and timeless performance the world would witness! It was brilliant and magical all at once. In short of three seconds, the audience was on their feet, and by three minutes forty-five seconds the world was at his feet, witnessing the most incredible Artist of our time and the famous backslide “Moonwalk” that made us insane as we practiced and emulated this tricky sliding step over and over during school recess until we had it down pack. All we had back then was our memory. The first ones to achieve these feet feats were crowned the kings of the school and Michael, well; he was now the vehicle for all of our dreams to take flight.

In those days, you could turn on the radio dial and switch stations three times only to find “Beat It” playing on two stations and Billie Jean on the other simultaneously. We had life-size posters of MJ taped over our bedroom walls. Nappy-haired people would be rocking greasy jerry curls with one single curl dangling on top of their forehead and sport grease stains around their t-shirt collars. We all begged our parents to get us the red leather “Beat It” jacket but settled for anything that was either leatherette, plastic, shiny, red, or with zippers. At school, Afros, Jerry Curls, Straight and sugared Spiked hairs would debate over who was better; Michael Jackson or Boy George!!??… Nostalgia can be sweet and yes we were insanely passionate!

In 1984 while MJ was taking the world by storm with his Thriller album and winning his eight Grammys, my father sent me to bed before the show was over… I fussed and cried myself to sleep…. Michael ruled, he was indeed “THE KING”! The day is announced, and Michael and his brothers are coming to Montreal with the Victory Tour, my dad and Uncle went together, and I still remember the anger and hurt I felt for being left out, for being betrayed. Again I cried all the tears of my tiny soul.

All I can say is, Mike never left me, even when some stopped believing, he was still my King.

He had been my dream, and I would never let go!

I was busy manifesting my path, but the idea of him and what he had inspired me to become remained. I danced my life to my own rhythm, at my own pace. When society and even close ones would tell me to give up on my dream of being a street dancer; Ballet dancers themselves had to retire around the age of thirty, how could I even think of making a living with street dancing ?! Well, I am incredibly thankful for turning a deaf ear to the negative comments and keep on doing ME.

I had my first child at sixteen, a second at eighteen, a third child at 24 and I still kept dancing, baby in arms trying to get better at my neck popping (MJ was so good at that), teaching my classes at the Westmount YMCA or the various gyms because “respected” dance studios weren’t hiring street dancers. In the 90’s we would use party dances as a way to merge our skills with aerobic, we called it Hi-Low Funk, Funk aerobics, Funk, and Grooves haha!!! We soon were very much in demand and would start to perform and choreograph Rap and RnB artist. Whenever or wherever the opportunity knocked, we made it happen. Club contests, Bar Mitzvah’s, fundraisers, fashion shows, weddings but the clubs were always and forever our training grounds and where we would meet each other to share skills with a hint of a battling ego.

Right before leaving Montreal for Las Vegas a friend of mine and die-hard MJ fan gave me the greatest gift ever as a thank you token for teaching at his dance school 8 Count; Not original Beat It jacket but a 1984 leatherette version with all the zips in the right places… yeah!! (Thank You, Steve Bolton!! Ps: He also later became the dance choreographer for the Xbox 360 Kinect game, Michael Jackson-The Experience). The day I was given the jacket, I was wearing black pants and a blue colored t-shirt; similar to the one in the “Beat It” video which was playing on the TV in the dance reception hallway!! Freaky or perfect synchronicity?

I think that the Universe took an interest in my passion and dedication because I never wavered from my purpose even though the challenges I faced were numerous. The storms were always in perfect harmony with the wisdom I needed to learn. My struggles, hard work, preparationand resilience, led to opportunities which in turn led to meeting THE ONE!

On February 2nd, 2007, in Las Vegas, Nevada, Michael Jackson came to watch the 10 pm show of The Beatles LOVE from Cirque Du Soleil. Almost 36 then, my dream finally came true! I had poured more than 25 years of love into my Art, and I had finally won the cosmic lottery.

What can I say…? Meeting MJ was surreal!!! I found out he was in the audience one number before my Lady Madonna act. As I danced out my soul, I could actually see him in the audience with his dark shades and silky black suit; The moment I had been waiting for all my life. Dance for my King!!

What people don’t know is, that night, MJ did everything in his power to come backstage and meet us! An all-time fan of the MGM Mirage, Siegfriedand Roy’s show, he knew all the hidden doors leading to The Beatles LOVE backstage and dressing rooms. I heard later that he peeked his head in most artist’s dressing rooms, engaging in conversation, touching their costumes, hugging them even though they had full body make-up. Full of gratitude, he kept saying he was truly inspired and just loved the show. When MJ and his entourage were making their exit, his bodyguards didn’t even try to stop us and just asked us “Are you artists from the show also?” and we just nodded happily, they were also full of gratitude and congratulated us on a great show and just like that, the keepers of the gate moved graciously aside and THERE HE WAS!!! Bigger than life, taller than I had expected and so handsome!

As MJ was making his way towards us, everyone from the small group of the dressing room E girls were screaming… “Tash! Go!!!”, Just like they knew it was my turn to talk to him. When he made eye contact with me an urge to start Locking came over me, and while I danced/Locked in front of MJ, I told him “You are the reason why I’m here… Thank you (all that while Locking I swear)!!!” He started laughing, jumping up and down, tripping and hopping backward like a child who had been given the coolest gift ever, and after he was done running around he came up to me grabbed my hand, asked what I did in the show and said; “Wow!!! You were so good!!!” Then he proceeded to ask me my name and where I was from, and when I told him Montreal, Canada, he started to tell me about how he loved the city. He also recalled going with his brothers for the Victory Tour to which I replied; “ I know, that day I cried all night because my dad and my uncle didn’t bring me to see the show!” Still in shock that MJ and I are conversing my cast mates were screaming; “Tash!!! Take a picture!” on cue, Michael just grabbed me real tight just like I was a longtime friend of his and I remembered saying to myself as they were taking THE picture…”Omg! MJ’s hair is in my face right now!!!” Hahahaha!”

I don’t remember anything after that! I was in awe!!! I even had a nightmare that night about that picture, like it had never happened or was ruined and I woke up in sweats still trying to figure out if I had dreamt this whole thing or not. It was insane passion at its greatest.

The next day, there it was in my Gmail inbox thanks to (Christel Stjernebjer), THE picture with THE KING! The most genuine, humble and sweetest Superstar I had ever met. I thought he was going to be untouchable, but he was so down to earth! He was my childhood, my inspiration, and my dream had finally come true… One of the greatest moments of my life!

I say one of the greatest … besides giving birth to my children (oh and yeah I became a grandma a month prior to meeting MJ and had a fourth child two years later). I keep on dancing, and I keep on dreaming that he meets me in my dreams again, just like back in the days.

I will never stop dreaming!

Thank you for being an Extra-Ordinary, inspirational human who rocked my world!